Our Adventures in Iceland 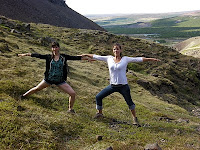 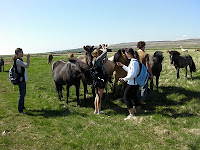 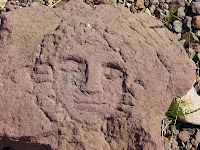 In my previous post, I went through our daily routine on our Icelandic yoga adventure earlier this summer.  Now, as promised, I bring you our daily excursions!  We wouldn't have called the weeklong yoga retreat an adventure if we weren't serious about bringing it.  So, here's how it played out:
Sunday-Our first day in Iceland.  We had a full day of Blue Lagoon, a little of Reykjavik, driving out to Reykholt, an hour of yoga, dinner, and then we split up to have our own little adventures if we'd like before sleep.  My partner and I headed up into the hills near the hotel to take in the view.  It was still sunny out at 11pm.  I think some of the others in our group went in the hot pots, took walks, and enjoyed the wellness rooms.
Monday-After yoga and lunch, a man named Jonny came to pick us up.  He drove us to the waterfalls of Hraunfoss and Barnafoss about 15 min. away.  The water comes from nearby glaciers and is so blue and fresh.  Surrounded by lava rock fields, we were lucky to have a warm day.  We did some yoga asanas in the landscape.
Then we moved on to the area called Husafell.  There's this artist named Pall, who has made the area known.  He works out there on his rock art creations, which I just adore.  There is a ravine nearby that you can hike, so after we spent time with his magical rocks, we split up into groups of 3 for the hike.  Ben, AC, and Sheree took the high route and climbed the huge hill trying to find the waterfall.  Liana, David, and I took the ravine.  We stepped around more of Pall's rocks, saw some interesting plants, lots of spiders, moss, and eventually had to walk across slippery rocks to get closer to the waterfall.  It was a trip to see the other 3 so high up above us!  They came to a little natural pool of water up there.  Over an hour later, we all met up back at the base to compare notes.  An amazing afternoon.  To top it all off, after dinner, Haukur (from the hotel) gave us a presentation and talk about Iceland's mythology, history, and the hidden people.
Tuesday:  This was our true adventure day because we formed it ourselves and had no idea what to expect.  We heard from the hotel that a woman who sometimes works there also has a farm way up on the hill about 2 miles away.  So, once again after our morning of yoga and food, we set out on our own.  The six of us hopped over a barbed wire fence surrounding the field and began the trek over these mounds of grass and dirt that made us feel like video game competitors hopping from mound to mound.  Eventually we made it to the little river where we took off our shoes and socks to ford across (and then spent a moment skipping stones).  Next we came across a herd of Icelandic horses and simply spent time enjoying their company.  So sweet!  They were sad for us to leave, but again we went under another fence to continue the last part up the hill to the farm (Kloppareykir).  Upon arrival, we were met by the friendly Hilda, who took us all around the farm introducing us to the animals and so kindly answering all our questions.  She let us sit on her horse (we couldn't ride them because they were all sick with colds...though strong Liana pretty much rode one and gave us all something to care about, whew!) We went in to the barn where the pregnant sheep were and got to hold some of the little lambs.  And then to meet some little chicks and roosters.
There was a cold wind this day, though sunny.  By this point, it was nearing evening, but none of us could tell.  We again split up.  David, Sheree, and I took off in the opposite direction to find the 9-hole golf course!  We again had to ford the river (and thank goodness for Sheree and her stash of granola bars), but made it to the course that the old farmer had made out of his fields after he was too injured to physically work anymore.  It was great!  I was cold and exhausted, but upon seeing this creation of fun...we all perked up.  Sheree and I shared clubs and we all took turns perfecting our swing, losing balls, and sinking putts.  We even stopped after hole 3 to have coffee and homemade Icelandic doughnuts that the owner made, called kleinur.  Such fun!  None of us could say we'd ever tried golfing in such an incredible, diverse, unique setting (at 9pm at that) before.  Luckily, we got a ride back to the hotel and met the others just in time to make it for dinner before the kitchen closed.
Whew, so there's a taste of the week so far!  I'll finish in the next post...
Posted by Jenn at 3:19 PM